Today is a big day for Columbia, and it's a big day for me. I consider myself supremely fortunate to have been a part of this community at a time when a second wave of creation was unfolding. Caring about Columbia, and becoming involved in its future, has given me a connection to my home that I wouldn't have had otherwise (without being here at its inception.)

Here's a look back at where I was two years ago, to get you in the mood for today's big event. I hope I'll see you there.


I often wonder what it was like to be here at the beginning of Columbia. It must have been an amazing time. You can visit Barbara Kellner at the Columbia Archives to get a taste, or travel in a specially designed vehicle if you get the chance, but otherwise, let's face it. We missed out.

Until now. This Saturday the Inner Arbor Trust is holding the groundbreaking event for the Chrysalis, the first piece of Merriweather Park in Symphony Woods. The Chrysalis will be an amphitheater that can be used for all sorts of community events. Think music at Wine in the Woods and more. Think all sorts of events we've never had in Symphony Woods before. Think people enjoying downtown Columbia.

It's the beginning of something amazing: a park that will define Columbia for the new century. This will be the heart of a welcoming, vibrant community that celebrates nature and the arts.

In one of my favorite movies, "A Thousand Clowns", Jason Robard's character Murray likes to go down to the docks to see off cruise ships. He explains, "It’s a great thing to do when you are about to start something new; it gives you the genuine feeling of the beginning of things."

The experience of being there at the beginning of things. I've been waiting a long time for a taste of this.

Yesterday, at long last, I became a pioneer. Not the well-known Columbia Pioneer with the capital P, but an entirely new kind of pioneer. Lower-case, maybe, but every bit as proud. Look at that second definition above. It is Columbia as a verb. You'll see words like instigate, launch, spearhead, develop, set in motion. 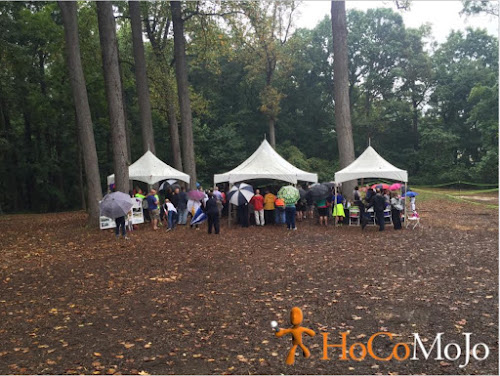 That's me with the bright green, Chrysalis-green umbrella, just right of center. Almost two hundred people showed up yesterday--in the rain--to participate in the ground-breaking event for the Chrysalis amphitheater. This is the beginning of Merriweather Park  in Symphony Woods. We have begun.

You've heard about the Inner Arbor plan? Maybe you signed a petition to get an amazing park started for our community. Perhaps you've been to their website to see
the plans. Or did you stop by the booth at Wine in the Woods? Yesterday speaker
Michael McCall reminded us that progress has many parents. And in that moment I realized that I had become a pioneer.

I've been blogging about this park since at least January, 2013. I signed the petition, wrote letters to the editor, spoke at CA Board Meetings (multiple times), spoke at the Planning Board hearing. I volunteered at the Inner Arbor booth at Wine in the Woods. I say this not to boast, but to show the path by which I became a pioneer. And I didn't really even know it was happening.

If Columbia is to survive into the future, it must have second-wave pioneers. The fact that nearly two hundred people, including young children and teens, came out to celebrate the beginning of something new, says that there's a pretty healthy wave shaping up in our little town. We will not die. We will not be a footnote in the history of well-meaning planned communities.

Yesterday representatives from the State, County, and leaders from Columbia came together to make something happen. This was quintessential Village Green/Town²: where Columbia and Howard County intersect. County Executive Alan Kittleman spoke about bringing young people back to the park. County Councilwoman Mary Kay Sigaty talked about the importance of art within our community and as a focal point in the park. The representative from the Howard Hughes Corporation described how the park will be part of a vibrant Downtown Columbia.

In case you ever thought that the golden age of Columbia had come and gone and that you missed it, think again. It's never too late to become a pioneer.