LakeFest is back. At the lake. With craft vendors, fun for kids, musical performers, a Lake Walk, and what looks like an amazing experience called Architects of Air.

I've seen a lot of publicity over the last week on Facebook, in particular for the Architects of Air installation. Perhaps the new management at CFA is not so interested in Twitter. Or perhaps the "LakeFest" name is not as important as it used to be?

And No, I don't remember the City Fair, and Yes, I have heard that it was far better than anything that has happened since. Just to get that out of the way.

I've seen quite a few posts lately about Columbia happenings where people felt out of the loop. One of the ways I attempt to stay in the loop has to do with a change I made to my settings on Facebook. At the top of a page,where it says "Liked" and "Following", you can click to indicate how much you want to see posts. Click on "See First" if you want to keep up with what's happening. It has really helped me.

That's probably the only reason I got a clue that there was an opportunity to buy Columbia 50th bricks for the Lakefront. Like most of us, I rely on Facebook quite a bit for that kind of info, but, as we all know, their algorithm for what we see is often a mystery. When it comes to local news, I want it to be in my face, daily.

So click on the Lakefest link above, see what's happening, and make your plans for the weekend. And, if you missed your chance to Buy a Brick, you can still get in on the ground floor at the Chrysalis.

While you are Downtown this weekend, see if you can spot some new friends along the walkway. 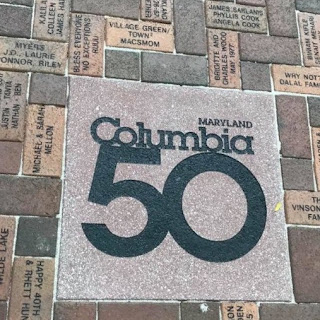