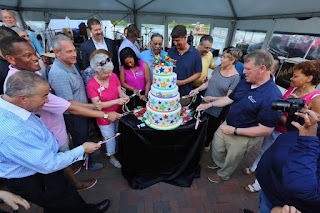 Were you there on Saturday night for the 50th Birthday cake-cutting? I had planned on going but got spooked by the heat. If only summer didn't have to be so dang hot.

I noticed in photographs what a vast array of local elected officials were assembled for the event. In fact, many of the photos I saw are so crowded that you can barely see see Milton Matthews, President of the Columbia Association. I would've thought this was his gig, possibly flanked by each Village CA rep? As is typical, I wasn't there so I don't know how it all went down. I was happy to find this photo on the County Executive's page. (Used with permission.)

But I do wonder if there has always been so much HoCo representation at the Columbia Birthday event. I started this blog largely as attempt to examine Columbia vs HoCo tensions. It's interesting to see how intertwined the interests of both have become in recent years. I'm sure there are still some die-hards who feel that one could easily do just fine without the other, thank you. But by and large there appears to be a growing consensus that we must all hang together, etc., etc.

As the the cake itself--I hear it was from Charm City Cakes, of television's "Ace of Cakes" fame. I also heard that the general public would be receiving cupcakes. If so, who ate the fancy ceremonial cake? I'm curious.

What was your favorite part of Lakefest?