Last summer I came across a recipe for a vaguely Moroccan radish and orange salad. I thought, "that sounds good." And then I thought, "no one else at my house will eat this." And that, my friends, was the end of that. But then this summer I came face-to-face with a bunch of radishes at the Oakland Mills Farmer's Market and I felt a glimmer of rebelliousness. And I bought them.

Of course I couldn't find the recipe. I found half a dozen other similar ones. All required that the radishes be thinly sliced. Oh, joy. So I went to the seldom-opened cupboard and hefted out the old Cuisinart. 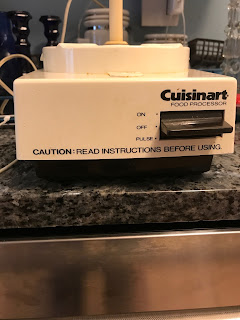 Indeed it is old. I bought it in 1983 by putting together all the cash gifts from our wedding. It was a hundred dollars, the most expensive thing I had ever purchased. It seemed an outlandish purchase for a newlywed whose husband was still in college and who lived on the second floor of a converted machine shop with a kitchen that didn't even have any counters.

When I set down the old food processor and wiped it clean of dust I felt a pang of sadness in my heart. After all these years, after every thing that had happened, would it even still work?

It sliced the radishes effortlessly and I began to recreate the recipe from memory. Radishes, oranges, olive oil, cayenne, cumin, chili powder, salt, a hint of sugar...I looked at the old Pyrex mixing bowl that I'd bought one year on eBay to remind me of my childhood. The air I was breathing was heavy with memory. 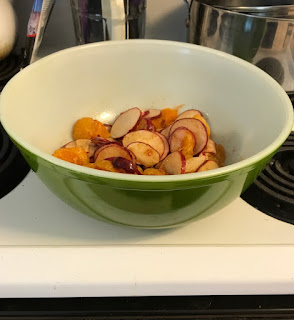 I took a taste, aware that the flavors wouldn't have melded yet. Even so, something wasn't quite right. I added just a bit of apple cider vinegar--better. But something was missing. 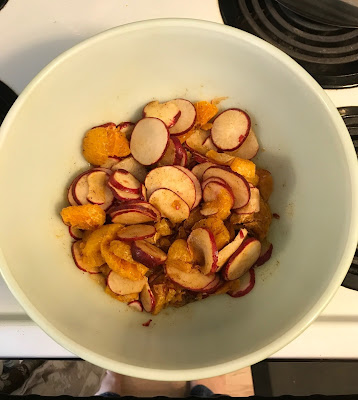 Parsley. Didn't some of the recipes I'd consulted have chopped, fresh parsley? Maybe that was what I needed. 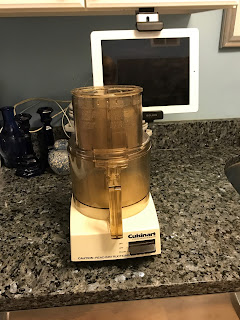 I switched blades and pulsed the parsley in short bursts, somehow knowing what to do even though I hadn't done it in years. I thought of gourmet meals in that tiny, four room furnished apartment, and putting up pepper jelly and marmalade and some kind of citrus salsa that was just a little too weird to be credible. That was when I learned you shouldn't scratch your face after you've been seeding hot peppers.

I stood for a moment in my beautiful blue and white kitchen with shiny granite countertops but I didn't feel entirely there. Something about that old food processor had jogged something inside me. Proust had his madeleine; I had my...Cuisinart? 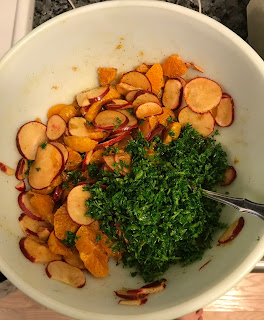 That tiny apartment gave way to a bigger one. Gourmet meals and culinary experiments melted away into the love and care for a new baby. The food processor was pushed to the side. A microwave moved in and heated frozen dinners for the tired new parents. It seemed I cooked from scratch less  and less. I was just so tired. And it made so many dishes to wash. We never had a dishwasher. 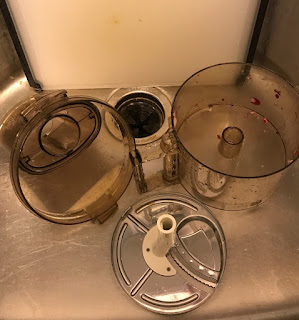 I stood there at the sink and felt a rush of grief for everything that was lost: the marriage that was not strong enough to  bear the weight of life's challenges, my unbounded enthusiasm for cooking, a trust in the goodness of the future. So much was lost and I put it away inside my mind like the food processor on the shelf in the cupboard. 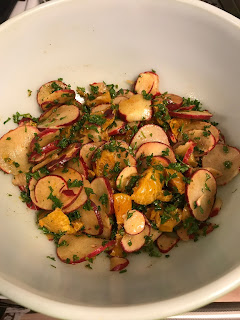 When I was done I started to put the old food processor away and then I stopped and made a place for it on the counter. There's life in the old gal yet.

This post owes a tip of the hat to the work of local bloggers AnnieRie and Wendy Goldman Scherer.
--jam