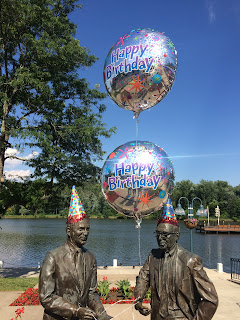 It was an occasion I just could not miss. The actual 50th Birthday of Columbia, the People Tree, and celebrating the  return of the Lakefront Carillon. Yes, they cut the cake during Lakefest, but Wednesday was The Actual Day.

As my teen daughter and I walked from our car down to the Lakefront, she asked me what it was going to be like. Just for fun, we brainstormed what sort of Bingo card would be applicable. Here's what we came up with, and, to be clear, most of these were hers. (Rather Columbia-savvy, don't you think?)
More on this later.

When we got closer to the lake we were amused to see the statue of the Rouse brothers all dressed up for the occasion. (See photo above by David Greisman.) A small crowd of people were gathering, ranging in age from babies in strollers to folks who might have been their grandparents. A podium was set up and a few chairs were arranged beside it. It was hot in the direct sun but many people found a way to tuck themselves into the shade.

As for our imaginary Bingo card, I think we scored ten for ten. Milton Matthews spoke, as did County Executive Allan Kittleman, and a representative from Howard Hughes. And there was someone in the crowd who was running for office, but we already knew who he was. Amongst all the speeches we very likely did hear all the key words we had brainstormed earlier.

But, just like the festive Rouse brothers statue, there were some lovely surprises:
All in all, the event exceeded our expectations. There are times that I lament not having been here at the beginning. This event felt like it was for everyone, no matter when they had come, and I liked that.

When it was finished, we walked over to Whole Foods, had some dinner, and went to the Chrysalis for the Columbia 50th Birthday Pops Concert presented by the Columbia Orchestra.