Meanwhile, back at the portapotties...

A longtime reader passed along this Columbia Urban Legend which was just too much fun to keep to myself.

I heard this from someone who used to work at the Rouse company, his father was an executive there, and he designed many of the older complexes. So the story as I heard it about the portapots: they were not there originally. The bars are just a way to keep them there without being too unattractive. Originally, everyone used the bathrooms at Clyde’s if they were down at the lake. This included the teenagers. As the elders are wont to do to GenX’ers, they tried to push them out without being blatant about it. Clyde’s stopped allowing the teenagers to come in and use the bathroom. So, the teens did a protest. They lined up along the front windows and peed on the glass. Thus it was known as the Great Columbia Piss-In.

The portapots showed up within a few days.

Has anyone else out there heard this? Or do you perhaps know someone who participated in this act of civil disobedience?

Or perhaps it's just a good story.

Tonight at the Chrysalis, under the baton of Robert Miller: 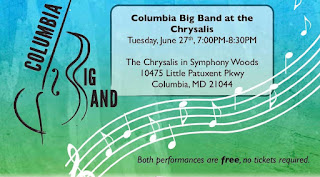 Bring your blanket or your lawn chairs. Bring your picnic dinner. Bring your kids, bring a friend. Come on out!

https://www.facebook.com/VillageGreenTownSquared/?ref=bookmarks
Posted by Julia A. McCready at 5:02 AM