A Report from the Front


The other evening I saw an online post in which a joint venture by a man and women was labeled as purely an initiative of the man.

It brought to mind this post from 2014. For the record, I haven't seen much improvement on this since it was written. 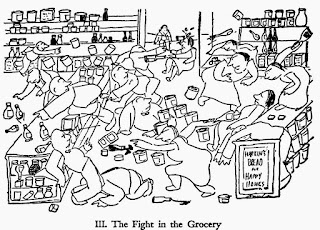 This image is taken from a series of cartoons by James Thurber, entitled "The War Between Men and Women." It came to mind this morning in light of the recent controversy surrounding the #YesAllWomen hashtag, and the defensive counter-hashtag #NotAllMen.

Around Howard County we don't have much of an all-out war, but there are days when it feels as though women in public service, political races, and even blogging have to work twice as hard to be thought half as good. We have a bit of a Boys Club at work here: not ruthless, not mean-spirited, but careless and unseeing.

What do I mean? Take a look at this:

In short, there is a kind of benevolent marginalizing of women on the local scene.

Yes, I know. #NotAllMen in #hoco are like this. And yet, #YesAllWomen have experienced this treatment. One is rendered invisible. A woman might be thought of as good conversation, great to bounce around ideas with, and just the right person to host an at-home candidate event. But would that favor be returned?

I had a discussion recently with a woman running for office locally, and this issue came to the fore. We agreed that there were certain exceptional men who went against the grain on this. What made them different? Our conclusion was that these men were confident enough in themselves that they didn't fear equality with women.

This is why I am so excited by Emerge Maryland, a group recruiting, training and supporting women for political service, and by women friends who are running, or blogging, or engaging in important local dialogue. It is also why I favor male candidates who show through their actions that women and equal and valuable.

It's never going to come down to a battle at the supermarket here in Howard County. It's far more subtle than that. It happens little by little, day after day. I look at my daughters and know I must do something to contribute to a better future.