As if by magic, in response to yesterday's post about thanking road workers a photograph appeared so we can finally give credit where it is due. 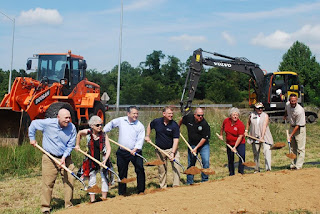 Oh, wait. This isn't Route 29, it's Route 32. And it isn't actually legitimate road workers. It's elected officials mugging for a ceremonial photo opp.

I know that, in the world of politics, ceremonial photo opps are just a part of the job, but for some reason I find the ones with all of the shovels to be particularly objectionable. How many of the people  in this photo would last ten minutes doing the kind of hard physical labor involved in road work? (Not to pick on them; I wouldn't, either.)

If one's livelihood depends on running for re-election then having one's likeness reproduced in multiple photographs becomes a highly desirable goal.

Just once, though, I'd like to see the spotlight shining on the people who do the real work.

As that fellow on the radio says: not a sermon, just a thought.

Comments are welcome here:https://www.facebook.com/VillageGreenTownSquared/?ref=bookmarks
Posted by Julia A. McCready at 3:24 AM