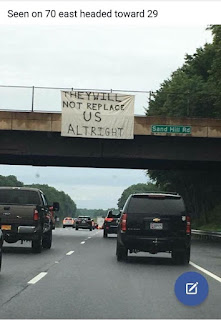 First off, I have no use for the term "Alt-right". Let's call it what it is: fascism. And it's flying it's ugly little flag over Route 70 in Howard County. (FYI: it's no longer there.)

While on some level the people who marched in Charlottesville were motivated by a perverse, exceptional hate, they were also, on another level, driven by a very ordinary desire for power. But that desire is based in an impoverished understanding of power as the replacement and domination of others.

It appears that these people have friends in Howard County, Maryland. I think that's something that everyone, both Democrat and Republican, should be concerned about. This is not a benign political viewpoint. It is poison that promotes violence. Denying its existence will not make it go away.

What is the appropriate response? Can we afford to shake our heads and say, "This is not us" and just move on? It's far easier for white people, comfortable in our own privilege, to "tut-tut" and then do nothing. It's a far more immediate threat to all those who are considered "other" by white supremacists.

I'm not in the habit of calling things un-American, but this, my friends, is it. Facsim and Democracy cannot co-exist. I doubt very sincerely that these people will come to a #OneHoward or #ChooseCivility event in the hope of "having dialogue" with anyone. If conventional wisdom holds true, they are probably home trolling people on the internet.

This sign, though. Somebody left their home and risked losing anonymity to give these words of hate a place of prominence in our community.

What will be next? And what do we do to protect our community and our neighbors?