News you can use from NextDoor: (Stevens Forest edition)


A Bear Hunt is taking place in various parts of the country! Place a stuffed Bear or other animals or dolls, etc. randomly in your windows for children to see while walking or riding in cars. I’m participating, how about you?
I’m in!
Since the beginning of our social distancing I have seen several recommendations for sharing signs of goodwill with our neighbors. This is probably my favorite so far, although rainbows in windows and chalking sidewalks are also appealing.
I just have a thing about bears. 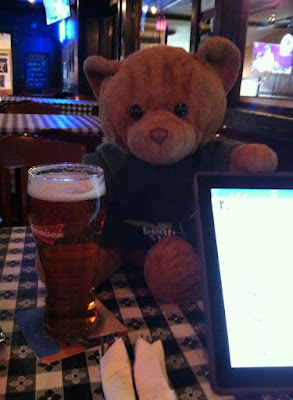 This is Buddy. He has been known to accompany me to the Second Chance Saloon. That’s not his beer, by the way. He’s not of age.
Bears much bigger than Buddy have been making the rounds in France and around the world for the last several years since the advent of Les Nounours des Gobelins, whose daily adventures are chronicled on Facebook and beyond. Here’s a throwback piece by area journalist and blogger Marge Neal that suggests a regional connection:
Scribbles from the Margen: Edgemere: Global Influencer?
Putting a bear in the window, or a rainbow, or chalking your sidewalk to greet children (or anyone, really) whose daily lives have become much more solitary feels like an attempt to maintain a sense of community in a time when we have so little control of many things. We cannot meet up for a play date at the park or happy hour at the pub. But we can post a sign for the wayfarer that they are not alone in their journey.
Who knew that the Pilgrim’s Way would be marked by bears? (Well, maybe the bears did. They don’t miss much.)
Unlike the requirements and restrictions that compound daily, a suggestion to put a bear in your window is just that: a suggestion. A free will offering, one might say. And if you don’t have a bear, improvise. If putting stuff in your window just isn’t your thing, how about offering a smile to those whose paths you cross at six foot intervals? A friendly wave?
It’s important to note that this announcement comes from the Stevens Forest NextDoor. I can’t guarantee it’s happening in your particular part of Columbia/HoCo. But you certainly could set the ball rolling if you are so inclined...
All of this is to say that it’s possible you may see neighborhood children peering in your windows. Don’t be alarmed. They’re just looking for bears.