Stepping Out of Line

Let’s start with a statement we can all agree on: people are not cows.
A bit of background information: during my recent post-operative recuperation I found myself drawn to veterinarian-themed television programs. After watching numerous visits where the vets were called to farms to assist ailing cows or give routine treatment, I began to think a lot about cattle chutes.
Wikipedia defines a cattle chute as follows:
...a narrow corridor built for cattle, sheep, pigs and other animals to travel through when being herded from one location to another that is nearby. A conventional race consists of parallel panels or fences with a space between them just wide enough for one animal to pass through comfortably without being able to turn around, thus forming the animals into a queue that only allows them to go forward. It is used for routine husbandry activities such as drafting (sorting) or loading animals via ramp or loading chute into a vehicle; placing them one at a time in a cattle crush (variations also called a squeeze chute or standing stock) for examination, marking or veterinary treatment.
Farmers can use the chutes to get the cows to go where they want them to go, basically by narrowing, then eliminating, their choices.
People get to make their own choices.
But sometimes we reduce our own autonomy by deciding to read and contemplate only the things we know already. The things that make us feel comfortable. Ideas that don’t challenge us. The more we do that, the more we narrow our field of vision and the more likely that we will keep moving forward along the same path, eventually unable to turn around.
You may have seen recent social media posts about public relations events where SRO’s were giving out snowballs and snacks in Oakland Mills and Harpers Choice.

These events do not necessarily promote healthy relationships with police so much as they signal to privileged white parents, “Look how kind we are. Look how we help the underprivileged children.” They reinforce what many want to believe already.  A recent presentation was most likely more of the same: Learn About SRO’s with Maryland Center for School Safety . While I haven’t seen it, the wording of the announcement and the line-up of participants suggests to me that those on the panel are apologists for the practice of school policing.

And I suspect that people who are more likely to be inclined to be in support of SRO’s in schools were the kind of people who were drawn to it. We move forward along the chutes we build for ourselves. We love to hear people who reinforce our views.

People whose children’s educational experience has been harmed by the presence of police in our schools have heard all those arguments before. Those are the default explanations brought forward by those in positions of power to justify a practice which has become so entrenched that even suggesting it isn’t effective provokes a feeling of alarm. The parents of Black and Brown students don’t need extra education on school policing. They need white parents to choose to educate themselves why school policing creates a toxic environment for their children.

But that would involve making a concerted effort to move out of the chute. It is far easier to let the arguments of the status quo push us ever forward along the same old arguments that we know and have grown accustomed to. It is not our children who are being harmed.

I’d like to recommend an event far different than the one promoted by the Maryland Center for School Safety. The Anti-Racist Education Alliance  is presenting a Police-Free Schools Teach-In  tonight at eight pm. Click on the link to find out how you can participate. 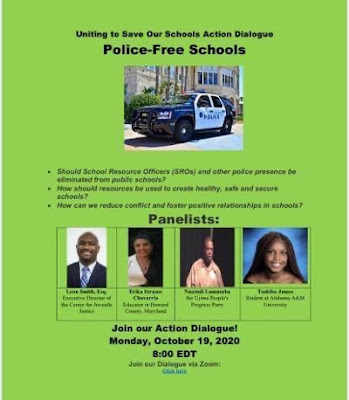 If you have been predisposed to defend keeping things just the way they are, you owe it to yourself to step outside of your comfort zone and learn about how school policing has criminalized the behavior of Black and Brown students and made them feel uncomfortable and unwelcome in their own schools. If you are like most nice white parents this will be information you haven’t heard. Did you know that more funding to support professional counselors and more training in Restorative Practices is already known to produce better outcomes for students than school policing?

Are you brave enough to move out of the chute?

People are not cows. We have the freedom to make our own choices. We have the intellectual capacity to learn differing points of view and assess new evidence.

But we have to make the choice to broaden our world, to challenge our thinking. Can Howard County do that?