For those of you who have been celebrating the return of sporting events, here’s good news: there’s still time to get your tickets for this year’s MLQ Championship. Even better, it’s being held in Howard County. 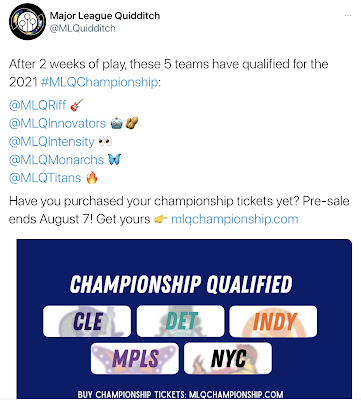 That’s right, it’s Quidditch. Major League Quidditch, no less. Three days of championship matches will take place in Troy Park beginning on Saturday, August 21st. You can purchase tickets here and,if you’re a true devotee, order a jersey in support of your favorite team. Alas, it appears that Gryffindor did not make the finals.

When I first learned about Quidditch coming to Howard County several years ago I was nonplussed. It didn’t much make sense to me as a game without the requisite magic and flight described in J.K. Rowling’s Harry Potter series. Despite my personal opinions, Major League Quidditch is clearly a thing, or, as it likes to call itself: MLQ. This strickes me as similar to Kentucky Fried Chicken rebranding as KFC, but, what do I know?

If you click on the MLQ website link their photo makes it abundantly clear that Quidditch is a contact sport. I wonder how it feels to turn up at an urgent care facility with Quidditch injuries? Can medical professionals restrain themselves from asking the obvious question, “What? Did you fall off your broom?”

All kidding aside, I’m completely behind the event on the third day of the event: Take Back the Pitch. I mentioned this in May if this year as you may recall.

Take Back the Pitch is a showcase that challenges the current understanding of gender in quidditch and opens opportunities for gender diverse athletes to play quidditch out from under the scrutiny of misogyny, transmisogyny, and misdirected misogyny. Through The Gender Diversity Initiative, MLQ seeks to address the very real ramifications of sexism and transphobia for cis and trans women, non-binary folk, and trans men. Through the open-access Take Back the Pitch tournament, MLQ aims to highlight and lift up athletes that are overlooked by their teams and in the community on account of sex and gender, and give them the leadership opportunities, playing time and diverse skill training they deserve all the time. Registration is open to any quidditch player who is not a cis male. All skill levels welcome.

I think this is pretty darned cool, although I note that holding the event on a Monday means it is open only to those who can afford to take a day off from work. The same holds for spectators. Sigh. I hope that, despite this, Monday’s event draws a good crowd. I commend the intention to honor players who are often overlooked or excluded from “prime time” play, but I hope that in future years they’ll give them “prime time” exposure.

Just for fun, I checked out ticket prices. I was pleasantly surprised. Presale: Ultimate Fan Weekend Pass is only $45.00.

Our premium ticket option! In addition to a weekend pass that allows you to enter and exit the event as you please Saturday, Sunday AND Monday, you'll receive the following:

Who says everything in Columbia/HoCo is overpriced?