Perhaps this one could be called “The Curious Case of the Complicated Clamshell.”

I got more excited than one might imagine by the news that Howard County Recycling could now accept clamshell containers. It’s been killing me to toss them into the trash. This was such exciting news that I decided to write a blog post about it. I staged an impromptu photo shoot with a few clamshells I had lying around the kitchen. 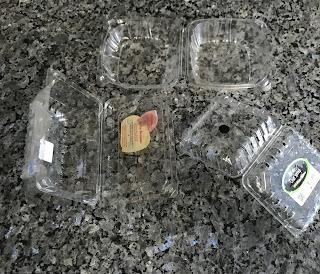 But…wait. Didn’t the announcement say “Number 5 plastic clamshells”? These were labeled Number 1. I went back to the handy-dandy email I had received from Howard County Recycling. 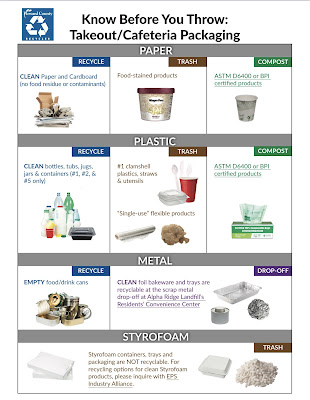 It turns out that there’s more than one kind of clamshell and the ones on my counter were the wrong kind and not recyclable.

I understand the basic concept. There’s no point in attempting to recycle something if there’s no market for the post-recycled content. Someone has to want it when you are done with it.

Back in my childhood, before plastic had taken over the world, we had two kinds of trash. At our house they were called “garbage” and “cans and bottles”. It wasn’t until far into adulthood that I realized that some kind of recyling must have been going on there.

But now the world is awash in a variety of different plastics and not every kind is recyclable. To complicate matters further, it really depends on where you live and what kind of a recycling operation is going on in your community. If I moved from Howard County to some other place, I would very likely have to relearn what is recyclable (if anything) all over again.

I sadly took my Number 1 plastic clamshell-looking things and put them in the trash.

I have an app on my phone that lets me identify plants. You take a photograph and the app compares it to its own photographic database of plants. I’m pretty sure it uses your location to rule out, for instance, plants that aren’t native to your particular area.

So here’s my pitch: make an app like that but for recycling. I hold my phone’s camera over the item, take a picture, the app knows my location and can tell me if that thing is recyclable where I live. Bingo.

“Congratulations! You have spotted a Number 1 plastic clamshell container. These containers are often used for fresh fruit and deli items. Unfortunately they are not recycled in Howard County, Maryland.”

Don’t get me wrong. I’m not angry that Howard County doesn’t recycle my particular kind of clamshell. As I said, I understand how that works. And, frankly, I wouldn’t be anywhere near as excited about recycling if it weren’t for the folks at Howard County Recycling and their helpful newsletters and social media presence. I just want an app that can settle for me without a doubt whether the thing I have goes in the recycling or in the trash.

Yes, I know it would take a ton of money and hours of work to create such an app. No, I don’t think it is at all likely that someone will create one. This has never stopped me from wishing for something. It’s simply fun to imagine it.

In the meantime, summer is a great time to get fruit from your Howard County Farmers’ Markets and it doesn’t come in plastic. 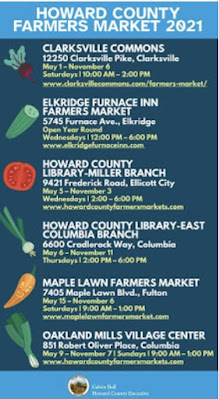