The new courthouse is finally open. The ribbon-cutting photos are all over social media. So is local commentary, both positive and negative. But this post isn’t about either. It’s about how to get there.

This tweet from Commute Howard was timely and helpful: 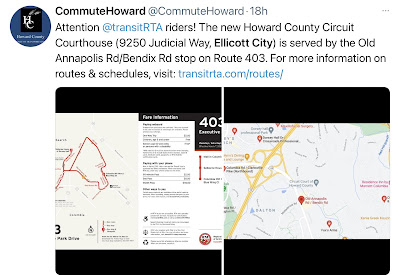 There you have it. Not everyone who needs to visit the new courthouse will own a car or have Uber money. For some reason I just adored this. I’m making up an imaginary narrative here:

Two more things. First, the nearest places to grab something to eat if you are at the courthouse are now Wendy’s and Pizza Hut. Will we see any new restaurants pop up in the immediate vicinity? And what about a place to grab something for that pretrial headache or a new pair of stockings if yours run at the last minute? Hmm…that would be Walgreens in my direction or Target in the other direction. Will the new Courthouse become a financial boost to nearby businesses?

And the other thing. I expect that one of my readers will fill me in here. Doesn’t the courthouse have to be located in the County Seat, which is Ellicott City? Yet the new one is clearly in Columbia. Solutions might be to declare the new site as being in Ellicott City (complicated?) and changing the County Seat to Columbia (probably more complicated.)

Whether it’s in Ellicott City or Columbia, Commute Howard wants you to know that you can take public transit.