It rained most of Sunday, off and on. Sometimes light, sometimes heavy. The clouds gathered, the sky grew dark, and it rained. It was still raining when the phone rang and I learned that Michael McCall had died.

Michael McCall is best known locally for his involvement in the birth of the park which is now called Merriweather Park at Symphony Woods. He was the creator and champion of the Inner Arbor Plan. He shepherded the progress of the Chrysalis from concept to plan to construction to completion.

The commitment to revitalize and transform the piece of land known as Symphony Woods was an integral part of the Downtown Plan in 2010. The mission statement for the park at the outset was straightforward:

To develop and revitalize open space, known as Symphony Woods, as a public park.

This was inspiring for some and challenging for others.

Those who were inspired, and I count myself as one of them, found themselves believing in a vision for a park that was every bit as big an idea as Rouse’s plans for Columbia itself. Wisely, McCall knew he could not make the park happen alone. A park like this needed believers, and he found them: reached out, appealed, cajoled, reasoned, attended meeting after meeting to articulate his vision to different audiences.

At the groundbreaking for the Chrysalis McCall made it clear that he knew that the success was not his alone when he said, “Progress has many parents.”  Yet lighting the spark that ignited imaginations and committing himself to the joy of a park for the people of Columbia was no small thing. 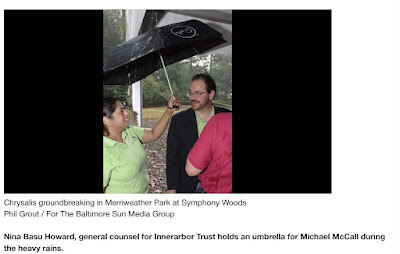 It was raining the day of the Chrysalis groundbreaking. I bought a new umbrella for the occasion. You know you are making progress when a crowd of people show up in the rain to celebrate the joy of things yet unseen. Those assembled included not only well-wishers and local dignitaries but also children. Especially exciting to me was the class of middle schoolers from Oakland Mills who had been combining their love of Minecraft with research on the structure and design of the Chrysalis.

One day I stopped by the Chrysalis construction site as it neared its completion. Michael had agreed to meet me there and show me around. He gave me all the time I needed to ask questions and take photographs as I gathered information for a blog post. The next day I discovered he had been taking pictures, too, when he sent me a several photographs that caught me lying on my back in the middle of the stage, focusing on the ceiling. 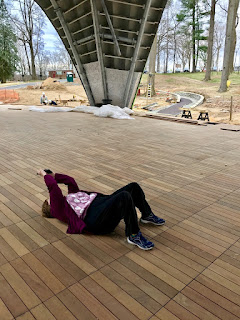 Without him, this view was one I never would have seen.

It was raining on the day of the Chrysalis’s dedication and opening. It rained off and on all day. That did not stop the crowd of people who came to celebrate the beginning of something beautiful and new. Many remarked that it had rained on the opening night of Merriweather Post Pavillion, too. They were there. They remembered. Sometimes there will be rain, they reasoned. We do not let that stop us.

It rained most of Sunday, off and on. Sometimes light, sometimes heavy.  The clouds gathered, the sky grew dark, and it rained. The phone rang and I learned that Michael McCall had died.

The park that he began will be finished; I truly believe that, though it will continue to take the time and dedication of “many parents” to see it through to its completion. Sometimes there will be rain. We will not let that stop us.

The Chrysalis is, exactly as he said, a high-performance stage and urban-scale sculpture as well as a gift to the people of Columbia. It has truly become the symbol of Columbia’s next 50 years.

The imagination and joy that Michael McCall shared with us will always be present in the park. For me it will be a reminder of how important it is to share your gifts. Share them, believe in them; your community needs you more than you know.

Thank you, Michael. Without you this is a view we never would have seen. 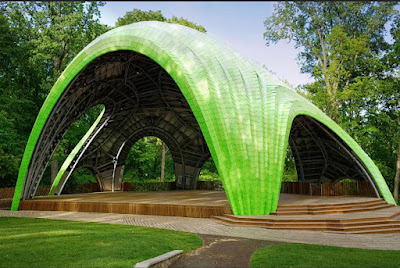