Last night the United States Coast Guard Band performed at the Chrysalis. They’re out on the road celebrating the 231st birthday of the Coast Guard. I saw some video clips from the folks at Merriweather Park at Symphony Woods and, I must say, that band is pretty darned good. I’m sorry I missed that.

But for some reason I was under the weather yesterday. I stayed home and we watched the first half of Questlove’s “Summer of Soul”. But that’s an entire blog post unto itself. Really.

Also last night, the Columbia Democratic Club held an Ice Cream Social at the Locust Park Neighborhood  Center. From the looks of the photos they appear to have had a great turn out. Of course, photographs don’t tell everything but it does look as though the CDC has moved past controversies of the last year and emerged on the other side rejuvenated and focused. What better way to celebrate that than with a little ice cream?

I know that last night was also the official National Night Out and there were numerous celebrations throughout Columbia/HoCo. I used to be a big fan of NNO but I found myself this year with a profound case of ambivalence. If you read this blog regularly you probably know why.  I’m increasingly having the same feelings about National Night Out that I have come to have about stories we were told about the First Thanksgiving and Christopher Columbus.

Nonetheless there are many good citizens of who participate in National Night Out with the goal of making Columbia/HoCo a safer place by being more friendly and interconnected. I’m all for that and I’m grateful for people who live, day-to-day, working to make their community a place where there are familiar faces and helpful neighbors.

In the middle of the night, well, in the morning, really, there was an earthquake. I slept right through it. This is understandable because it was in Clarksville. From HoCoMoJo :

A 2.1 magnitude earthquake in Clarksville was detected as far away as Jessup and Olney Wednesday morning. A loud, rolling rumble was heard while household items shook for 10-15 seconds, and small waves rippled across Lake Elkhorn in Columbia.

Wow. Last night was a busy night, all around.

Today? Well today the Columbia Association invites you to think up names for our helpful aqua mowers. It looks like somebody has a serious crush on Mr. Trash Wheel. 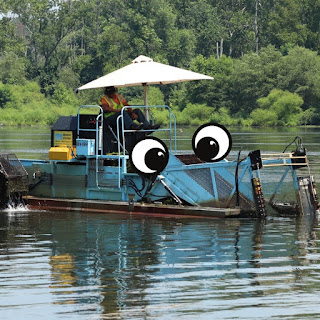 Sounds fun. You can learn more here. Can Aquamower merch and swag be far behind? I wonder what Colonel Gateway would think.