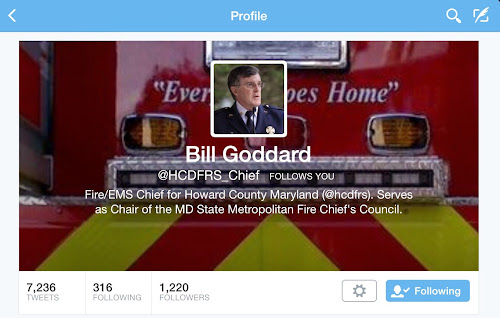 I recommend to you today a man I have never met: Bill Goddard. I have come to respect him solely from my interactions with him on Twitter. I can't remember when I started following him, but it may have been in the aftermath of the shooting at the mall. His Twitter feed has been unfailingly polite, supportive of the community, informative, and wise.

On November 21st, County Executive-elect Alan Kittleman announced that Mr. Goddard had resigned. The Sun article lays the groundwork for the possibility that this was not a decision the Fire Chief came to all by himself. New political administrations apparently have the right to shake things up, bring in their own people. The spoils of war, you know.

Be that as it may, my gut tells me that this is a good, hard-working man who has served Howard County well, and that this is a loss for us. I am not an expert in the fire department. After all, you might say, I only know him on Twitter. What could I know?

I challenge you to go to his Twitter feed and just read. Go back as far as you are able--it's only 140 characters at a time, after all. I think you will get a sense of what I did. This is a humble, very human public servant. Among other things, I think he may be the father of a teacher, because he never missed an opportunity to remind his readers of the dedication and value of those who go into the classroom every day and work with kids.

And maybe that made me like him even more. Just maybe.

This quote from Tom Coale is a reminder of what kind of risks are inherent in a fire fighter's life:

This afternoon, I found myself alongside the funeral cortege for Baltimore City firefighter Lt. James E. Bethea as it went north on 83. As I saw uniformed men and women standing on top of fire engines saluting from the overpass, I thought about how much we hear the term "public servant" during election season without really thinking about what it means. I am thankful there are people in this world like James Bethea; true public servants who risk their lives every day without title or recognition. It is a horrible tragedy every time they are lost.

Take a minute to go on Twitter and thank Mr. Goddard. I think it will mean a lot to him.

Posted with Blogsy
Posted by Julia A. McCready at 6:16 AM