When I was in high school I acted in a production of Thornton Wilder's one-act play, The Long Christmas Dinner. The play covers ninety years of Christmas dinner of the Bayard family. Similar to other Wilder plays, sets were minimal and much depended on mime. All we had were a table and chairs. The rest was up to us.

As we worked out the blocking for the play, I came up against a problem with the gravy boat. I would carefully "ladle" gravy onto my plate, but when I passed it on, my classmate picked it up and "poured" it. I was indignant. What kind of a philistine poured a gravy boat? Being young and inflexible, I pointed out her error to the director.

What followed was, shall we say, educational. It turned out that there were two kinds of gravy boats. The one at our house looked like this. 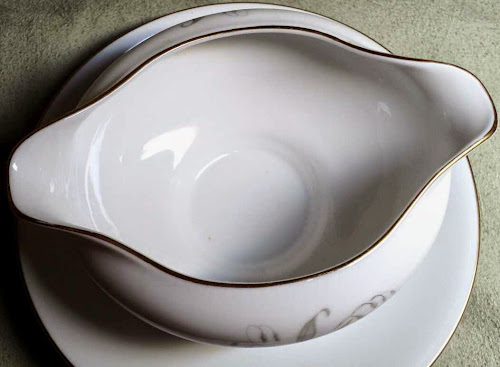 The top was fused to the saucer and you used a silver ladle to serve the gravy. 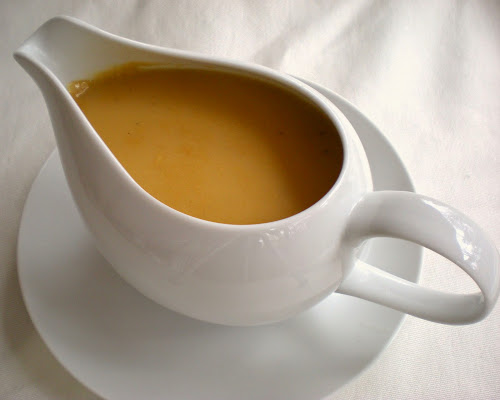 In fact, once the discussion started, I discovered that the vast majority of people around the table were familiar with her mental gravy boat. My sense of self-importance and righteous indignation was (deservedly) diminished.

I bring this up today after looking at many photos of Thanksgiving dinner yesterday. Some look familiar to me: dining room table, table cloth, good china, fancy serving dishes. A traditional menu. Some did not: big buffets lined with disposable aluminum serving pans filled with macaroni and cheese, rice dishes, greens.

What's this? Someone's Thanksgiving dinner looks different than mine?

It is amazing how such small things become the basis for judgement. We cling to our tribe and shrink from the ways of others. We use the differences to make assumptions. Does an aluminum disposable pan mean a lack of respect for tradition and "fine things"? Or does it speak volumes about gatherings which include multiple generations of extended family, where the focus is on making sure that everyone "gets enough"?

Despite Jame Howard's very good advice to include people of different backgrounds to our Thanksgiving celebrations, I am guessing that most of us eat that meal with folks who lay out the table exactly the way that we do. And that is the way that looks "right" to us. And a picture of something different makes us feel vaguely uncomfortable.

We think, "that's not right." Deep down, we try to put ourselves in that picture and think, "I wouldn't feel comfortable there."

With those "other" people.

We can use our diversity as a weapon of division, or embrace it as a way to learn something new. It can start with a gravy boat.

Posted with Blogsy
Posted by Julia A. McCready at 4:40 AM