A Friend of Education 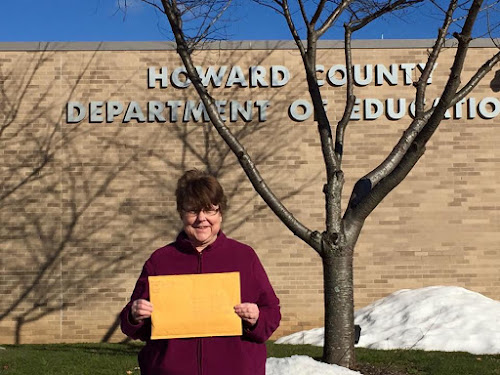 This is me yesterday afternoon, turning in a completed nomination packet for the Howard County Friends of Education Award. Here is a small part of what this packet contained:

I nominate Vicky Comer Cutromeo to receive the Friends of Education Award. As the parent of a student at Glenwood Middle School, she became concerned by continuing reports of staff and student illness. Despite being an active volunteer and supporter in the school community, she found she was unable to get the information she needed about conditions in the school and health issues connected to untreated mold growth at Glenwood.

She founded the Mold in Howard County Schools - Information for Parents Facebook group as a means of creating a clearinghouse of information to help parents, students, teachers, and staff around this issue.

Goal 2 -- concerns staff and supporting them so they may be successful. Ms. Cutroneo has served as a sounding board for faculty and staff seeking information about conditions in their schools and chronic health concerns which impair them as they seek to support students at the highest levels. Sick teachers and staff cannot thrive and provide the educational leadership required by Goal 1.

Goal 3 -- concerns working cooperatively with families. Ms. Cutroneo has created an online community for parents to share concerns, gather evidence, and connect with other parents whose children have become ill due to mold. Her Facebook group is a safe place for parents to express themselves and be listened to. She has treated parents with the respect they deserve as partners in the education of their children.

Goal 4 -- concerns supporting schools through world class practices. Ms. Cutromeo has campaigned tirelessly to advocate for Transparency and Responsiveness in our school system. She has gathered and analyzed a mountain of evidence to show that, where school buildings have been allowed to fall into disrepair, a world class education is not possible. She is a champion for improved maintenance of the school buildings where our children, our most valuable community assets, spend their days.

I cannot claim to have thought up this plan of action by myself. The idea was posted on Howard Public Ed and it immediately struck me as brilliant. So, I ran with it.

With things being the way they are these days, it seems highly unlikely that hcpss will bestow this award upon Ms. Cutromeo. In fact, I doubt they'll even go so far as to give her a ceremonial bookmark for participation. But that's okay. She's really busy embarking on her next community service project.

She's running for the Board of Education.