One sentence. In a release from the Howard County Police Department yesterday one sentence stood out. Why? It was completely unnecessary and not entirely truthful. 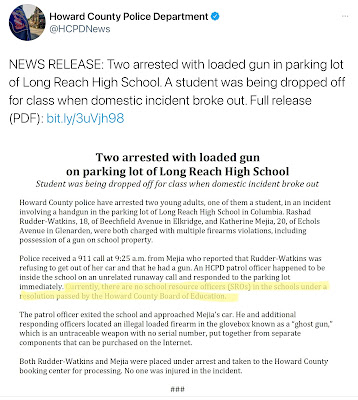 In an account of arrests made on the property of a county high school, the following sentence was included:

Currently, there are no school resource officers (SROs) in the schools under a resolution passed by the Howard County Board of Education.

Why do I say it was unnecessary? Well, if you read the release without that sentence, it is a complete account of how events unfolded and were handled by the police department. It is not necessary to the understanding of the incident in any way. It functions as an editorial comment. To my knowledge editorial comments don’t belong in this type of report.

As to its truthfulness? This is the part that is wavering on the edge of falsehood:

...under a resolution passed by the Howard County Board of Education.

The reason there are no police in Howard County Schools right now is that the Memorandum of Understanding between the police department and the school system expired and the police department has not submitted a new one for the board to vote on. You certainly would not know that from this sentence. It’s rather like a student who has not turned their homework in but blames it on the teacher.

It is hard not to view the inclusion of this sentence as a deliberate effort to influence public opinion. It certainly provoked a lot of ill feeling on social media. It did nothing to clarify the community discussion on school policing. It just stirred up a lot of mud.

The truth is, without that one sentence, the report is a good example of how our local police department can respond to criminal activity on school property without SROs in the schools.

I continue to find it disheartening that those who support school policing don’t seem to understand that it is a choice, not an essential requirement. Police were not always in schools. A decision was made that what was happening in the schools was something that should be “policed.” Since that decision was made school environments have not become safer. We have the power as a community to examine those decisions and choose something better.

Perhaps the people who made those decisions originally had good intentions. I don’t know. I do know that school policing does not work to make schools safer and actively harms Black and Brown students. Schools are for learning, not policing.

This is an extremely difficult conversation for us to have in Howard County. It does not make it any easier when the police department slips in a little lobbying with what should be “just the facts.”