Yesterday was the one year anniversary of the murder of George Floyd, a murder committed in public in front of witnesses who implored the murderer to stop. Details of the murder have played out in public over and over again during the last year. It would be horrific even if it were the only such murder to ever have occurred. Instead it is just one in a long line of similar brutality perpetrated by police against Black citizens of our country.

Yesterday when no one was looking someone left racist graffiti on signs in Harper’s Choice in Columbia. 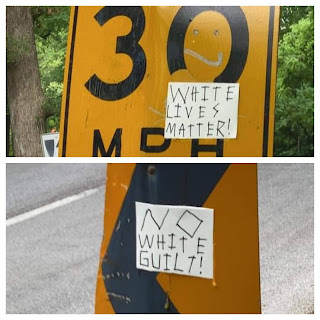 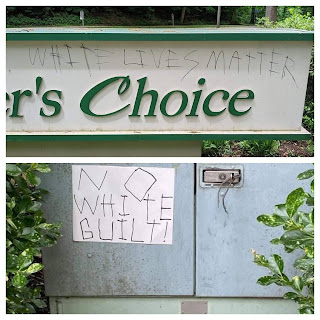 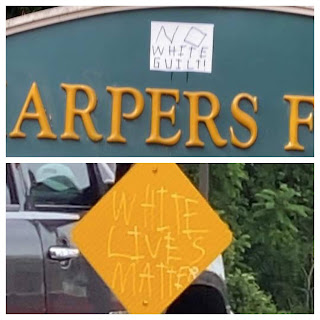 The day was already painful enough without plastering this kind of hate speech in our community for everyone to see. And yes, it is hate speech, because it mocks and denies the continued injustice and inequality experienced by Black people in this country. It pretends there is no such thing as racism and denies that we as white people have been complicit and need to take responsibility.

I sat and looked at these photos for a long time. This is more than property damage. This is racism and the defense of brutality writ large. It is painful on a day that already had too much pain too bear. 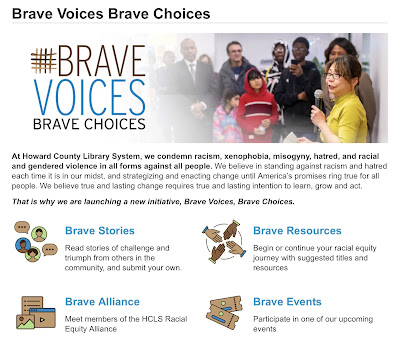 We have a choice in Columbia/HoCo as to whether we will ignore or deny the issues of race that clearly mar our community or whether we will face them. Refusing to choose is a sign to our neighbors that we give our approval for racism to continue unchallenged.

Last night I sat and looked at those photos from Harper’s Choice.  I tried to process the events of the day. And then I signed up for the next Brave Voices Brave Choices story event on June 3rd. I don’t know if I have a story to tell but I definitely have ears to listen.