Why? Because the person in question is an advocate to remove police/SROs from schools.

The fact that these “mean kids” could barely wait their turn to spew ridicule and scorn is not surprising but still appalling. Their words showed that they could not perceive the difference between responding to a crime scene and policing young people inside of school buildings. I would think this was a rather obvious distinction.

I can’t quite figure out why the article in the Sun by Ana Faguy shapes the story this way:

There is absolutely no mention of the signs that were defaced by graffiti. We know they were because we have photographs. Why didn’t that make it in to this account? Flyers are something meant for distribution. The pieces of paper that were affixed to public signs were mean to deface them. There’s a difference.

Another interesting piece of news involving the police was absolutely everywhere on social media yesterday. Your spirits will surely be lifted by this heartwarming story of how members of the Howard County Police helped an elderly couple who were scammed in a home improvement scheme. 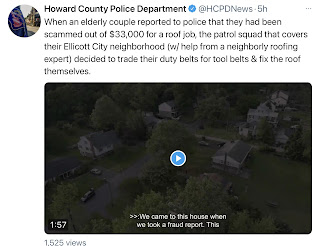 You can’t miss this story because it has been distributed to just about every media outlet in the area. My immediate thought:  What a lovely gesture! Let’s get police/SROs out of Howard County schools and free them up to do more work in the community. It’s a win-win all around.

But it’s worthwhile to point out that, just as there is a difference between responding to the scene of a crime and policing school children, there is also a difference between police work and community service. This is a great piece of public relations. It has nothing to do with how police treat Black and Brown students in our schools.

We’re smart enough to make these distinctions, aren’t we? Some folks seem to think we aren’t.

You know who is absolutely clear on these issues? The students at Wilde Lake High School who participated in a walkout event in support of removing SROs from our schools. They get it.

When are we going to get it?