For Father’s Day the plan was to drive to Charles Village in Baltimore to try a place called Doner Bros. My husband’s college years in Manchester left him with a deep love of all things “doner kebab” and he’s always up for finding a new place where he can indulge his cravings. (He’s deliriously happy about Halal Guys.)

At the last minute we realized that Baltimore Pride was on Saturday and that getting in and out of Charles Village might be impossible. To the Internet! It was soon established that there was a place called Doner Bistro in Frederick. So, to Frederick we went.

You know the deal. I don’t get out of The Bubble much. A forty-five minute drive just for dinner is not the usual for me. But this was for Father’s Day, and it was a beautiful evening, and it was family, and it felt like an adventure. (And yes, I really should get out more.)

When we arrived in the vicinity of the restaurant we saw lots of cars parked along the streets. Soon we noticed folks walking along carrying lawn chairs. Hmm. “Must be something going on tonight.” We found a public parking garage and set out on foot to find out destination.

If you’re familiar with downtown Frederick, you know. But, I didn’t. There’s an entire commercial center built around a creek which feels very much like San Antonio’s Riverwalk. Holy mackerel. I had no idea. And we just happened to be visiting on a lovely early summer evening when everything was darned near perfect and there was an outdoor concert at a park on the waterfront. (Hence the lawn chairs.) 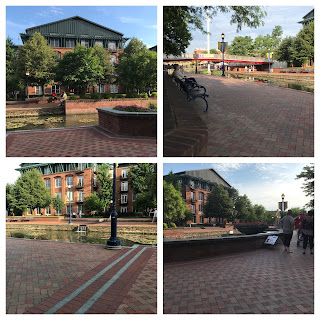 The restaurant was casual and the food was good and plentiful. We ate outside and enjoyed people-watching and dog-watching. People of all sorts were out and about. We heard the musicians begin to play. We might as well have been on vacation a million miles away from home.

After dinner my daughters walked further down to take a glimpse of the park where the concert was kicking off.

A:  What kind of music do you think it will be, based on the audience?
M: White peoples’ greatest hits.

She was right. We walked back to the car to the strains of “Come and Get Your Love” and “Brown Eyed Girl”.

Now I’m interested to find out how that area along the creek came to be and how Frederick got to be such a happening place. Who knows? Maybe it always was.
Posted by Julia A. McCready at 2:58 AM