As I looked out once more from the fifth fooor of 2 Merriweather at Downtown Columbia views, a question came to mind.

When did cities become bad?

There was certainly a time when watching big buildings go up was cause for excitement. Think of old film footage of NewYork City. The development and density of NYC meant the Brooklyn Bridge, the Chrysler Bulding, Radio City Music Hall, Rockefeller Center.

Of course, Columbia was never intended to be that big but it was intended to be a city. Yet with each new component of the Downtown Plan set in motion, I see protests that this is taking Columbia away from its roots and its true mission. And the underlying assumption is that cities are bad.

As I went through school there were many times that teachers taught me a particular line of thought:

We used to think gods and goddesses controlled nature and the planets.
Now we know about science.

We used to think illnesses were caused by humours.
Now we know about infections and antibiotics.

We used to think slavery was a part of life.
Now we know it’s wrong.

I think we all know that that old trope just doesn’t work in all situations. (Especially for that last one in particular.) I mention it because there seems to be a local feeling that:

We used to think cities were good.
Now we know they’re bad.

Blogger Dan Reed (Just Up the Pike) shares this bit of text referring to Montgomery County. 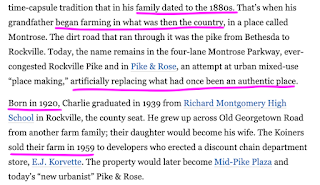 “...artificially replacing what had once been an authentic place.”


Having grown up in Montgomery County, I sometimes wonder when there will be room for nostalgia about this place that is not rooted in

There’s quite a lot of similarities between HoCo and MoCo.

Back to last night. When I look at the buildings going up I imagine new people living, working, and enjoying life in Columbia. I imagine Columbia finally becoming the City it was meant to be.

We used to think:
Now we know:

Is rural always better?
Was suburban an improvement?
What kind of development is best for people and the environment?
Posted by Julia A. McCready at 3:55 AM