A Song for the Day

On Sunday evening I sat in the audience at the Columbia Orchestra concert at the Chrysalis and I cried. I cried for my country. I cried for what we have become. And I cried for the injustices that we have always had and yet ignored.

I cried because this man, Sola Fadiran, a graduate of Glenelg High School, introduced me to a song that rocked me to my core. From the Inner Arbor Trust website: 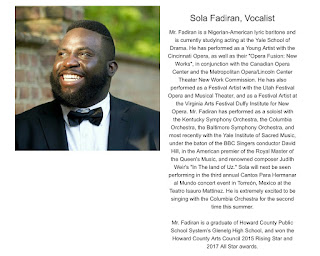 This song is from the Broadway musical “Ragtime”.

Mr. Fadiran’s performance reached inside me. The words and music set visions churning of children in border camps, frightened and suffering, of Muslim families separated by travel bans, of Black families mourning deaths at the hands of police too quick to resort to tactics of violence and brutality.

I felt my face, hot with anger, as I thought about how so many go about their daily lives without concern for those who suffer. How could this country bring forth such people, who shrug at injustice because it does not touch them? Who actively vote for those who make it happen?

But I also felt shame. Shame that I am not doing enough. Shame that stringing words together does not bring justice or lighten the burden of suffering.

Today is a day set aside for us to celebrate our country. Instead I give you this song. You can listen to it on Youtube but it won’t match being in the same space with the vibrations of it in your soul.