The summer of 2019 will be known as The One Where the Goat Ran Away.

For the past two days Columbia/HoCo has been abuzz with reports of a goat on the loose in the area near Howard Community College. I suggested to my family that it was the beginning of a very small agricultural program. They weren’t impressed. I pointed out that it was better than if it were a runaway from the culinary arts program. I was sternly admonished for even raising the possibility.

Let me just say that everyone, and I mean EVERYONE, has been ahead of me on this story. WBAL TV, WJZ TV, the Howard County Times, and even all the good folks on NextDoor, where the goat’s wanderings launched a thread of more than one hundred posts. And let’s not forget conversation on Facebook and Twitter. (and a lot of really bad goat jokes.)

WBAL’s post was the first one I read and there’s something vaguely poetic about it.

Eventually the goat was spotted by numerous residents in the Hawthorne neighborhood, including one woman who was startled while relaxing at the pool by its plaintive vocalisations. The adventurous goat made the rounds, eluding capture, for over 24 hours.

The fun was over when somebody called Animal Control. From @Ee_Jayne:

The goat has safely been captured by folks in Hawthorne. I heard him crying yesterday & got close to him, but he ran back into woods. 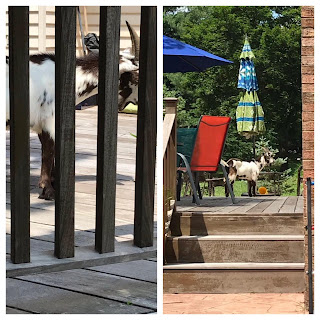 It turns out that someone did take that helpful advice on NextDoor to call Animal Control, and yes, Animal Control came out and did their thing and succeeded where others had failed. Towards the end of the evening this tweet from HoCoTimes reporter Erin Logan made me laugh:

A spokeswoman said the goat was found to be in good health. It’s currently chillin at the animal control facility.

But the owners haven’t come forward. COME GET UR GOAT.

So the story of the runaway goat has come to an end. Now the mystery of just who owns the goat begins. If it turns out to be a really good story, you know I’ll write about it. But you’ll probably see it on WBAL, WJZ, the Howard County Times, NextDoor, Facebook, and Twitter first.

I’ll just do the color commentary.
Posted by Julia A. McCready at 3:53 AM