The first hint I got was this statement on Twitter which seems to suggest that the writer believes the statue was meant to be a replacement for religious expression in the New American City:

Also, Howard County, or “HoCo” is home to Columbia, MD, developed by James Rouse. It’s sort of a quasi-Marxist utopia. They don’t allow churches there. But they have the “unity tree” by the lake. Oh it’s just splendid.

And over on Facebook the news of the new Azlon sculpture in the Merriweather District brought this response:

Please tell me this is replacing the “people tree”?!

I have to admit that the first time I saw photos of the new sculpture I thought of The People Tree, and whether Howard Hughes was looking to rebrand using Azlon as the symbol of the new Downtown Columbia. If they did that, I mused, would they be willing to let go of the People Tree as the property of Howard Hughes and allow it (and its name, and it’s likeness) to belong to the community?

Yes, I’m sure it’s far more complicated than that. And it doesn’t need to be either/or, necessarily.

It’s not exactly sacrilegious to dislike the People Tree. It did surprise me, though.

What do you think? Are you a fan of Columbia’s original symbol? Is Azlon competition for The People Tree? If there room in this town for the two of them?

Maybe we should go to the source. 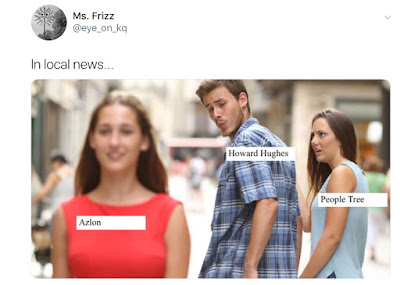