I have been stewing about the right way to share this article and I’ve finally decided to jump in and just do it.

Columbia parents vote with their bus; Believing older schools are inferior, they send children to newer one  by Gady A. Epstein and Erika D. Peterman for The Baltimore Sun 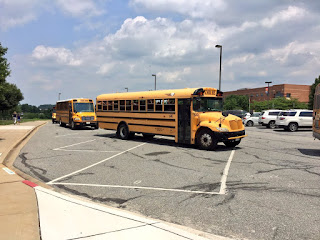 This turned up in my Twitter feed as a reference from an author and it just blew my mind. This article is from 1999, the year I moved to Columbia. I had no idea. Why on earth did the school system allow this? And do we believe for one moment that the parents choice to “self-bus” their children was about the age of the facilities in question?

“We had fliers posted on our mailboxes: Your house values are going down because your kids are going to Wilde Lake Middle."

It’s not race, they say, pulling white children and sending them to a white school.

This was apparently an example of school parents using the now-abandoned open enrollment policy and calling their experience an extraordinary circumstance. In case you wonder why we don’t have open enrollment anymore, I would hazard a guess that this may have had something to do with it.

This article was shared on Twitter by Lawrence Lanahan, author of “The Lines Between Us: Two Familes and a Quest to Cross Baltimore’s Racial Divide”.  He writes:

Learning about this particular episode in Columbia/Howard County’s history feels extremely timely to me, as hcpss contemplates another attempt at redistricting. It’s important to note that there are plenty of parents who object to long bus rides and children leaving their neighborhood when the object is racial and economic balance, yet they they had no difficulty with that if bus rides and leaving their neighborhood meant maintaining their attendance at largely white, affluent schools.

This is true nationwide, not just in our corner of the world. In some cases parents have abandoned public schools altogether rather than participate in schools which are racially, ethnically, and economically diverse. Just check around for independent schools founded in the late 1950’s, for example.

Years ago my husband and I bought a rug on Craigslist from a couple who lived in a neighborhood of McMansions which we had not even known was there. They had a little boy, we casually asked when he would be starting school. We had unexpectedly hit a nerve.

“They can’t expect us to go to that school, with all those FARM kids and low test scores! People like us,” the father said, gesturing around him and to the neighborhood at large. “We’re having a meeting, Something has to be done. It’s ridiculous!” He was indignant. They were sending their son to Catholic school.

White people, affluent people, people who are uncomfortable if the environment gets too “mixed”. As long as the school cachement areas reinforce their notions of comfort, they are fine. Once they get uncomfortable then the meetings start. And the protests. And the lawn signs and the matching t-shirts, and the flyers on the mailboxes.

It could be coming to a neighborhood near you.