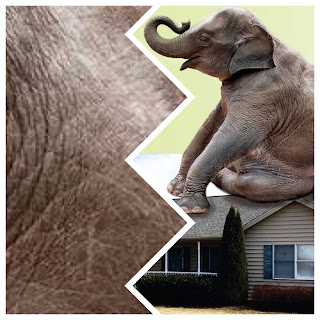 What if, I thought. What if? What if systemic racism in our schools is like an elephant on the roof? That elephant is holding people down. Those of us who aren’t being crushed under the weight of it don’t see that elephant.

We have good schools, we think. Everyone has a chance to do well. They just need to apply themselves.

We don’t recognize what an immense weight that elephant is on everyone. We don’t realize how much effort is invested all the time in trying to hold up our schools under the weight of that elephant. That elephant has been there so long that it is all but invisible to the privileged.

That elephant makes its presence known to those who feel rules applied unequally. It weighs down students who are less likely to be encouraged for academic challenge, more likely to be suspended. It looms large in racist slurs and tiny, hurtful micro aggressions. It throws its weight around in matters of segregation by real estate.

The elephant on the roof holds everyone down. Imagine what our schools could accomplish if the system were not invested in maintaining this enormous burden. Imagine the possibilities of young people flying free of the weight of systemic racism. Imagine neighborhoods, communities, and institutions addressing new challenges instead of struggling to maintain business as usual with an elephant on the roof.

If you’re still with me, I’m going to take the risk of taking this analogy one step further. If we want to get the elephant off the roof, it is our responsibility to get it off. And by “our” I mean the privileged, those  who are favored by the system as it stands. Those who may look at things as they are and just feel like that’s “normal”. Almost every day I read posts online from people who are afraid that if we take that elephant off the roof that there will be less for their children. It is as though opportunity is finite and allowing it for everyone will diminish somebody’s else’s.

As I get down to the nitty gritty in evaluating Board of Education candidates, I am taking a particular interest in those who aware of the elephant on the roof and our responsibility to get it down. I’m not looking at anyone who specializes in stronger roofs. I’m looking for specific ideas in the area of elephant removal.