My daughter and I visited UMBC yesterday for their Just for Juniors event. We were there with around two thousand other interested students and families. It was an excellent opportunity to see what a nearby institution has to offer in the areas my daughter wants to pursue.

One thing I did not know until yesterday is that the University of Maryland Baltimore County was founded in 1966. And Columbia Maryland was founded in 1967. Hmm. They’re chronological peers. As we toured the campus I saw examples of growth and change from the original plans. I’d love to learn more about the history of UMBC, especially with an eye to how it compares to our home town in the bubble.

First off, I have to say that those Retreivers are still pretty excited about basketball. And they have good reason to be. They led off their key note event with a promotional film about their Cinderella experience. But they quickly moved on to highlighting a variety of reasons to be excited about UMBC as an institution of higher learning. Overall, they let current students take the spotlight and those students were more than equal to the task.

Whoever is in charge of large admissions events should feel extremely proud of the Just for Juniors event. Whether it was checking in, moving through a breakfast line, signing up for a tour, or finding a workshop location, we were never more than about ten seconds from a human being who was ready to help us. All day long. The amount of planning and execution involved in an event like yesterday’s was immense. These folks know how to provide a positive experience on a grand scale.

I made it through the basic campus walking tour, but when it came to a second one focusing on arts buildings, I was ready for a rest. So I took a break with an iced mocha at the campus Starbucks and read the student newspaper. I think I may have gotten ahold of an April 1st edition. 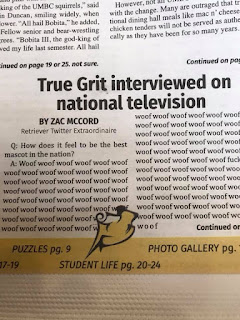 I wonder if there were any old guard folks who protested the addition of a Starbucks? I wonder if UMBC has experienced those same kinds of growing pains that Columbia is experiencing as it moved from being a young upstart to finding its way in a next generation?

We felt a great sense of community while visiting UMBC. I left wanting to learn more.
Posted by Julia A. McCready at 5:00 AM